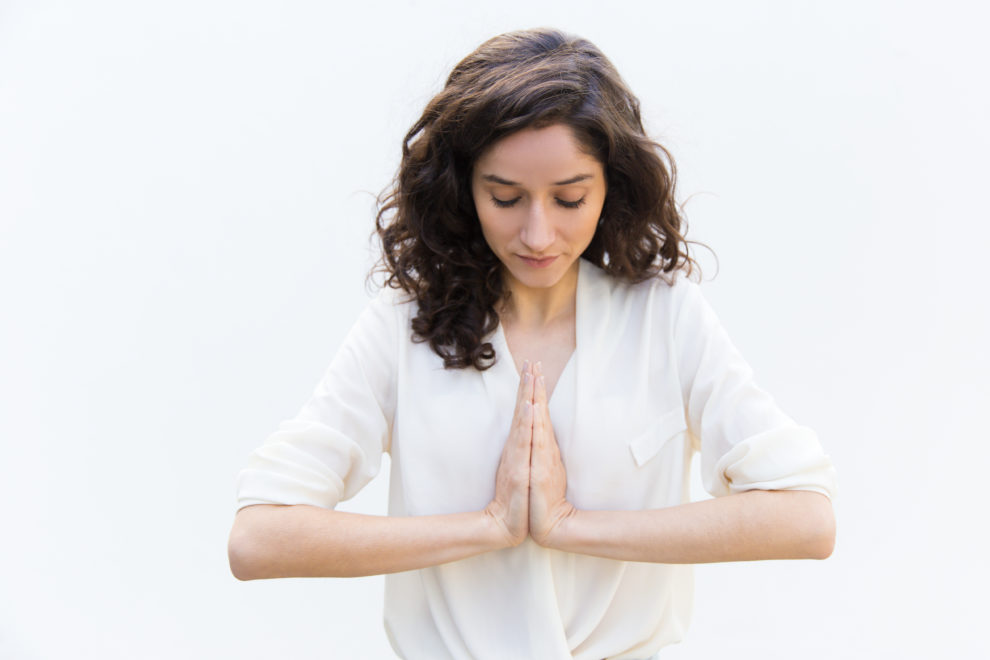 The Western handshake versus the Eastern anjali mudra: daily gestures that reveal much about two distinct cultures

“SHAKE HANDS AND COME OUT FIGHTING.” IT’S THE REFEREE’S final counsel to two pugilists about to beat each other’s brains out with clenched fists. Even outside the ring, a handshake can be a little off-putting. When one returns to the West from an extended sojourn in India or elsewhere in Asia, the hand suddenly thrust forward can seem more ominous than friendly, especially if the hand offered is that of a stranger.

This moment of intimidation has a history. According to some anthropologists, one early manifestation of the handshake in the West arose in medieval Europe. More than a few men approached others on the byways with daggers drawn for self-defense. To fend off the fear of a foe’s foul foil, weapons would be sheathed, and men would offer to each other open, visibly empty hands. It was a kind of surety, a gesture of trust which said, “See, I am unarmed. So you may safely let me approach.” Soon the gesture itself took on broad meaning, and less lethal men on the street adopted the handshake as the proper way to greet others.

In much of the world today, people do not shake hands when they meet. They may hug formally and kiss one another on the cheek, as in Eastern Europe and Arab states. They may bow softly, eyes turned to the ground, as in Japan and China. The Hawaiian greeting, termed honi, consists of placing the nostril gently beside that of the person greeted, a sharing of breath, life and prana.

For Hindus, of course, the greeting of choice is namaste. With both hands pressed together and held near the heart, the head gently bowed, one says, “Namaste,” or “Namaskara,” “Namaskaram” or “Namaskar” in the varied languages of the subcontinent. It is both a spoken greeting and a gesture, a mantra and a mudra. The prayerful hand position is a mudra called anjali, from the root anj, “to adorn,” “honor,” “celebrate.” The hands held in union signify the oneness of an apparently dual cosmos, the bringing together of spirit and matter, or the self meeting the Self. In Sanskrit namas means “bow,” “obeisance,” “reverential salutation.” It comes from the root nam, which carries meanings of bending, humbly submitting and becoming silent; te means “to you.” Thus namaste means “I bow to you.”

Namaste has become a veritable icon of Indianness. Indeed, there must be an Indian law that requires every travel brochure, calendar and poster to include an image of someone with palms pressed together, conveying to the world India’s hospitality, spirituality and graceful consciousness. And there can be subtle ways of enhancing the gesture, as in the West one might shake another’s hand too strongly, to impress and overpower them, or too briefly, indicating the withholding of genuine welcome. In the case of namaste, a deeper veneration is sometimes expressed by bringing the fingers of the clasped palms to the forehead, where they touch the brow, the site of the mystic third eye. A third form of namaste brings the palms completely above the head, a gesture said to focus consciousness in the subtle space just above the brahma-randhra, the aperture in the crown chakra. This form is so full of reverence it is reserved for God and the holiest of satgurus.

It is always interesting and often revealing to muse about the everyday cultural traits and habits that evolve in each nation and community. For instance, a saw for cutting lumber, if designed in the USA, is made in such a way that the carpenter leans into the saw, cutting away from his body. But in Japan saws are engineered so that the cutting takes place as the carpenter draws the saw toward himself. A small detail, but it yields a big difference. One is a thrust of power, the other provides more control in the cut, requiring surprisingly less effort. Each has its place in the global toolbox. Each speaks—like the handshake and namaste greeting—of an underlying perception of man’s relationship with things.

In the West we are more outgoing, forceful, externalized. Phone and web companies tell us, “Reach out and touch somebody.” We are unabashedly acquisitive, defining our progress in life by how much we have—how much wealth, influence, stored-up knowledge, status or whatever. Every culture exhibits such traits to some extent, but in the East, Mother is there to remind us, “Reach in and touch the Self.” Here we are taught to be more introspective, more concerned with the quality of things than their quantity, more attuned with the interior dimension of life, where things are not the thing. So there you have it, the whole of Eastern and Western culture summed up in the handshake, which reaches out horizontally to greet another, and namaste, which reaches in vertically to acknowledge that, in truth, there is no other.

As a test of how these two greetings differ, imagine you are magically confronted with the Divine. God walks up to you on the street, like George Burns in the movie “O God!” What do you do? Reach out to shake His/Her hand? Probably not. Though suitable between man and man, it’s an unseemly expression between man and God. We never shake hands with God. I mean, what if your palms are sweating? So, you namaste instead. The reason it feels natural to namaste before God is that it is, in its very essence, a spiritual gesture, not a worldly one. By a handshake we acknowledge our equality with others. We reveal our humanity. We convey how strong we are, how nervous, how aggressive or passive. There is a bold physicality to it. For these and other reasons, Popes never shake hands. Kings never shake hands. Even mothers don’t shake hands with their own children.

Garuda, Vishnu’s eagle mount, on a temple in Singapore.

Namaste is cosmically different. Kings do namaste. Satgurus namaste and mothers namaste to their own family. We all namaste before God, a holy man or holy place. The namaste gesture bespeaks our inner valuing of the sacredness of all. It betokens our intuition that all souls are divine. It reminds us in quite a graphic manner, and with insistent repetition, that we can see God everywhere and in every human being we meet. It is saying, silently, “I see the Deity in us both, and bow before It. I acknowledge the holiness of even this mundane meeting. I cannot separate that which is spiritual in us from that which is human and ordinary.”

And while we are singing the praises of namaste, it should be observed how efficient a gesture it is in an age of mass communication. A politician, or performer can greet fifty thousand people with a single namaste, and they can return the honor instantly. In such a situation a handshake is unthinkable and a mere waving of one hand is somehow frivolous. Recently, many non-Hindus, especially celebrities, are adopting namaste to avoid transmission of contact diseases.

There are other, more mystical meanings behind namaste. The nerve currents of the body converge in the feet, the solar plexus and the hands. Psychic energy leaves the body at these junctures. To “ground” that energy and balance the flow of prana streaming through the nerve system, yogis cross their legs in the lotus posture, and bring their hands together. The anjali mudra acts like a simple yogic asana, balancing and harmonizing our energies, keeping us centered, inwardly poised and mentally protected. It closes our aura, shielding us psychically. It keeps us from becoming too externalized, thus we remain close to our intuitive nature, our superconsciousness.

We asked a number of Hindus for their insights into namaste, what it means and why we do it. Here are a few responses:

“Namaste elevates one’s consciousness, reminding one that all beings, all existence is holy, is God. It draws the individual inward for a moment, inspires reflection on the deeper realities, softening the interface between people. It would be difficult to offend or feel animosity toward anyone that you greet as God.”

“Namaste is a gesture of friendship and kindness, also of thanks or special recognition. Mystically it is called namaskara mudra in the Agamic puja, and it centers one’s energy within the spine.”

“I’ve heard it means, ‘I salute God within you.’ The true namaste gesture is accompanied by bowing the head and shoulders slightly. This is a gesture that lessens our sense of ego and self-centeredness, requiring some humility to do it well—whereas shaking hands can be quite an arrogant event.”

“Touching the hands together puts you in touch with your center, your soul. Namaste puts you forward as a soul, not an outer personality.”

“The gesture has a subtle effect on the aura and nerve system. Bringing focused attention and a collection of one’s forces, so to speak. It also protects against unnecessary psychic connections which are fostered by shaking hands. This might be called a form of purity also—protecting one’s energies.”

“This form of acknowledgement is so lovely, so graceful. Just look at two people in namaste and you will see so much human beauty and refinement.” 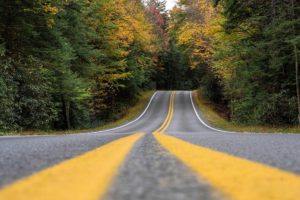 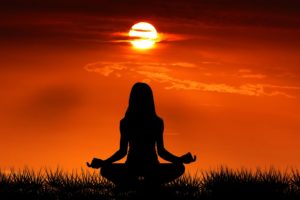 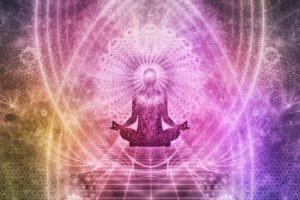 What is the significance of Maha Shivaratri ?
Nepal: The Ageless Doctor turned Recluse Khaptad Baba
Comment