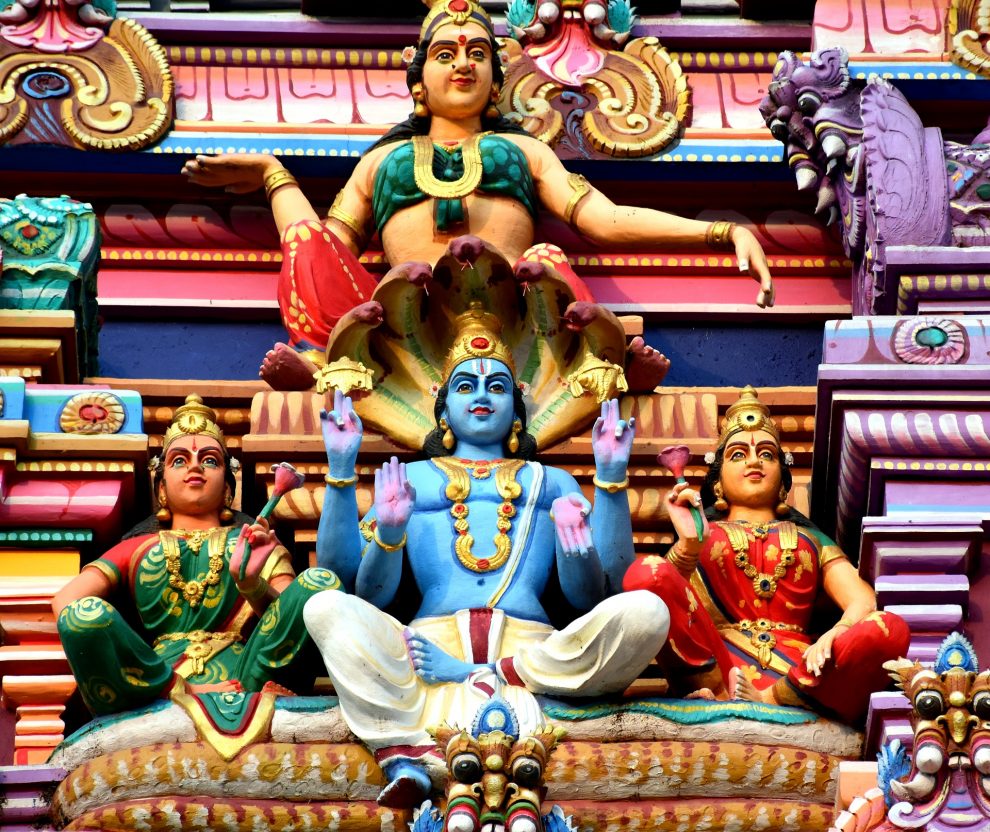 The Story behind the festival

There was a Brahmin named Sumant. With his wife Diksha, he had a daughter named Sushila. After the death of Diksha, Sumant married Karkash, who gave a lot of trouble to Sushila.

Sushila married Kaundinya, and they decided to leave the house to avoid the harassment of the stepmother. On the way to their new house, they stopped near a river to freshen up. Kaundinya went to take a bath. Sushila noticed a group of women who were worshiping. Which piqued her curiosity. she asked those women who were they worshipping? They replied saying they were worshiping “Anant”. Sushila asked them to elaborate more details on the ritual.

They told her that it was Anant’s vow. They explained their importance and ritual. Some fried “gharga” (made of flour) and “anarase” (special food) are prepared. Half of the prepared food needs to be given to the Brahmins. A “darbha” (sacred grass) in the shape of cobra is made and put in a bamboo basket. Then the snake (“shesh”) is worshiped with scented flowers, oil lamp, and incense sticks. Food is offered to the snake. A silk string is kept before the God and tied to the wrist. This string is called “Anant.” It has 14 knots and is colored with “Kumkum.” Women tie the “anant” on their left hand and men on their right hand.

The purpose of this vow is to obtain divinity and wealth. It is kept for 14 years.

After listening to this Sushila decided to take the Anant vow. she and Kaundinya began to prosper and became very wealthy after performing the ritual. One day Kaundinya noticed the Anant string on Sushila’s left hand. He asked his wife Sushila what that string is tied for? When he heard the story of the Anant vow, he was displeased and told his wife that they had become rich, not because of any power of Anant, but because of his efforts. The husband and wife had A heated argument followed. At the end of the argument, Kaundinya took the Anant string from Sushila’s hand and threw it into the fire.

After this incident, all sorts of calamities happened in their life, and they were reduced to extreme poverty. Kaundinya understood that it was punishment for having dishonored “Anant” and decided that he would undergo rigorous penance until God appeared to him.

Kaundinya went into the forest. There he saw a tree full of mangoes, but no one was eating them. Worms attacked the entire tree. He asked the tree if he had seen Anant but got a negative reply. Then Kaundinya saw a cow with her calf, then a bull standing on a field of grass without eating it. Then he saw two big lakes joined to each other with their waters mixing. Further, he saw a donkey and an elephant. To everyone, Kaundinya asked about Anant, but no one had heard this name. He became desperate and prepared a rope to hang himself.

Then suddenly an old, venerable Brahmin appeared before him. He removed the rope from Kaundinya’ s neck and led him into a cave. At first, it was very dark. But then a bright light appeared, and they reached a big palace. A great assembly of men and women had gathered. The old Brahmin went straight towards the throne.

Kaundinya could no longer see the Brahmin but only Vishnu instead. Kaundinya realized that Vishnu himself had come to save him and that Vishnu was Anant, the Eternal One. He confessed his sin in failing to recognize the Eternal in the string on Sushila’s hand. Anant promised Kaundinya that if he made the 14-year vow, he would be free from all his sins and would obtain wealth, children, and happiness. Anant disclosed the meaning of what Kaundinya had seen during the search. Anant explained that the mango tree was a Brahmin, who in a previous life had acquired plenty of knowledge, but had not communicated it to anyone.

The cow was the earth, which at the beginning had eaten all the seeds of plants. The bull was religion itself. Now he was standing on a field of green grass. The two lakes were sisters who loved each other very much, but all their alms were spent on each other only. The donkey was cruelty and anger. Finally, the elephant was Kaundinya’ s pride.

This is an important day in the Jain calendar of festivities. Digambara Jains observe Paryushana in the last 10 days of the bhado month, Anant Chaturdashi (also known as Anant Chaudas) is the last day of Paryushana. Kshamavani, the day the Jains ask for forgiveness for mistakes they have made intentionally or otherwise, is observed one day after Anant Chaturdashi. This is the day when Lord Vasupujya, 12th Tirthankara of the present cosmic cycle, attained nirvana.

How Can You Benefit From The Mahashivratri Sadhana?
Hinduism’s Today July Feature Story: Kumbh Mela 2019
Comment