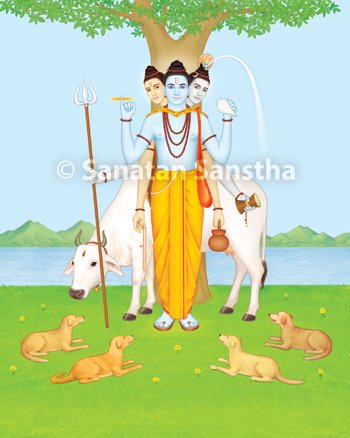 The 11th chapter of Shrimadbhagwat (Note 1) mentions a conversation between Yadu and Avadhut. In this part, Avadhut describes the Gurus He selected and what He learnt from them. Avadhut says – Everything in this universe is a ‘Guru’, because there is something or the other to be learnt from it. A negative aspect teaches what vices should be given up and a positive aspect teaches what virtues should be imbibed. I created an ocean of knowledge with a little from each of the twenty-four Gurus (as given ahead) and cleansed all my sins by bathing in it.

Tolerance and extreme patience should be like that of the earth.

Be detached like the wind, which remains unconcerned about the good or bad, while blowing over hot or cold regions. Under all circumstances, mumukshus (A seeker with intense desire for God-realisation) should tread with their own wish on the path prescribed by the Shrutis (Vedic texts), not paying attention to anyone’s virtues or defects.

Like the sky, the soul encompasses all living and non-living creation; yet it is unblemished, solitary and steady.

1. Like water, man should shower his love impartially on all.

2. Just as water lets its impurities settle to the bottom, and cleanses others of their impurities, man should also renounce the impurity of ego and acquire the treasure of spiritual knowledge.

3. Just as flowing water relinquishes its position when flowing from a higher to a lower level, uprooting haughty trees and nurturing humble vegetation, liberated souls should also renounce wealth and arrogance.

4. Just as stagnant water develops foul odour and flowing water remains uncontaminated, to prevent stagnation (attachment), wise men should also travel to various places of pilgrimage instead of staying in one place.

1. Man should be austere like the fire to receive enlightenment. He should partake of whatever is available, refrain from evil deeds and use his virtues appropriately.

2. When on a pilgrimage, instead of accumulating food and other things, he should use them.

3. He should always remain pure like the fire and display equality towards all.

4. When oblations are offered in the fire while reciting the Names of various Deities, the fire delivers them to the respective Deities without retaining anything for itself.

5. To become aware that the physical body is temporary, Datta made flame of fire a Guru. Just as a moment is sufficient to kindle or extinguish a fire, to create or destroy a physical body too from the Panchamahabhutas (Five Cosmic Principles) it does not require much time.

Keeping the future in mind, the sun accumulates water in the clouds, and at the appropriate moment, benevolently showers it upon the earth. Similarly, man should store whatever is useful and considering the place, time and current state should make it available impartially to all living beings.

Just as a falcon devours the pigeon and its family, time too destroys a man who has intense attachment to his wife and children and lives only for worldly pleasure. Thus, mumukshus (A seeker with intense desire for God-realisation) should be mentally detached from all this.

Since the python believes in its destiny, it fearlessly lies in one place. It is content with whatever food it gets any time and has no likes-dislikes. It is not perturbed if food is not available for some time, and despite possessing the strength, does not utilise it. In the same way, a mumukshu should have full faith in his destiny, eat whatever is available and not be vexed if nothing is available. He should be absorbed in contemplation of the true self.

1. The sea neither gets elated if the rivers bring a bountiful flow during the monsoons, nor does it feel aggrieved if they do not. As a result, it neither swells nor dries up. In the same way, man must remain steadfast in his duties, feeling neither happy with worldly pleasures, nor unhappy with a succession of tragedies. He should always remain immersed in Anand (Bliss).

2. Just as the sea keeps its length, breadth, depth and the treasures it holds a secret, man too should not show off his inherent qualities, but should always utilise them for the welfare of others.

Enchanted by the radiance of a lit lamp, the moth lunges on it and is charred to death. Similarly, a man who is fascinated by a woman’s beauty and youth for the sake of sexual pleasure finally perishes in it.

The queen bee and the honey collector

Overcoming many obstacles, a queen bee builds a hive in an inconvenient location high up on a tree and stores honey in it. It neither eats that honey, nor lets others eat it. Then, all of a sudden, a honey collector kills the queen bee and takes away the hive along with the honey. Similarly, a miser who amasses wealth with relentless effort, suddenly loses his wealth in a fire, to theft, the king, when it is squandered by immoral progeny or if he dies issueless, thus making him unhappy. After his death, the wealth remains as it is or is taken by a stranger. Keeping this in mind, man should stop amassing wealth.

Just as the honey collector acquires honey effortlessly, a male seeker too, instead of wasting effort in lighting a fire, collecting utensils, firewood etc., should partake food cooked in the home of a householder and utilise the time thus saved in the endeavour of God-realisation. By partaking food in a householder’s home, such mumukshus provide him with an opportunity to progress spiritually.

1. Man tries to capture a strong elephant by digging a pit, covering it with grass and placing a wooden cow-elephant covered with elephant skin on it. Enchanted by the cow-elephant, the elephant craves for sexual pleasure, rushes towards it and falls into the pit. This is how it is easily captured by man. Similarly, lured by sensuous pleasure, man is immediately trapped in bondage.

2. Allured by an adulterous woman, men perish in the same way as elephants (overcome with lust) die fighting amongst themselves for a cow-elephant.

1. A lotus which blossoms with the sun withers with the sunset. A bumblebee seated on it at that time gets trapped in it. Thus, realizing that attraction to object pleasure gives rise to bondage, man should refrain from attachment.

2. The bumblebee savours the fragrance of several lotuses instead of one. Similarly, mumukshus should realise that it is not possible to master every science and hence, they should grasp its implied meaning in a gist.

The musk-deer is as swift as the wind and hence, it is difficult to capture. However, it can be captured by luring it with melodious music. Keeping this in mind, man should refrain from attachment.

When some bait on a hook is thrown into the water, the fish gets lured, swallows the bait along with the hook and loses its life. Man too is caught up in self-gratification, and thus continues to suffer in the cycle of birth and death.

One night, despite a long wait, the prostitute Pingala did not get a single client. As she paced about hoping for one, she was fed up and suddenly developed detachment. So long as man has intense desire, he cannot sleep peacefully. On the contrary, the one who renounces all desires is not affected by any worldly unhappiness.

Spotting a lapwing fly with a fish in its beak, hundreds of crows and kites chased it pecking at it, and tried to snatch the fish. They followed it wherever it went. Overcome by exhaustion, the lapwing dropped the fish, which was then caught by a kite. Now the crows and other kites chased that kite for the fish. The lapwing perched itself peacefully on the branch of a tree. In this world, there is peace only if sense objects are discarded; else, one has to face great danger.

Without thinking of respect-disrespect, believing that the world is governed by destiny, man should lead a carefree life like a child and experience Anand.

When two bangles strike each other they make noise. The more their number, the more the noise. Similarly, when two people live together, there is a conversation, and when many live together, there is discord. Both situations are not conducive to peace of mind. Hence, those who practice Yoga (Union; spiritually it means union with God), meditation etc. should live in solitude.

One day an artisan was chiseling an arrow-head with great concentration, when a king’s pompous procession passed by. After sometime a man asked the artisan, “Did you see the king’s procession passing by ?” The artisan replied, “I was too engrossed in my work to notice anything”. Like the artisan, a mumukshu should surrender all his senses to God and meditate.

Two serpents neither live together nor travel together. They travel very quietly and cautiously and dwell in others house, without building their own. They do not move openly, do not attack without reason and do not get angry unless they are harmed by another. In the same way, two intellectuals should never travel together, should have self-control while talking, should not quarrel with anyone, should behave wisely, should never collect people and deliver speeches. Instead of building any dwelling for themselves, they should live wherever they wish. Owning a house generates pride and increases greed.

A spider weaves its web by secreting a sticky thread from its navel and plays in it day and night. Later, when it wants to free itself, it just swallows the web. God does the same. He creates the world of His own wish, indulges in various kinds of (Divine) plays in it, dissolves it whenever He wishes and lives in solitude. Therefore, just like the spider which weaves a web time and again, as per His own wish God destroys the living world and recreates it whenever He wants. Hence, do not give importance to events of this world.

Constant meditation on some object transforms a being into the object of meditation. A wasp builds its home with mud and placing a worm in it, keeps blowing on it. Thus, the worm constantly thinks of the wasp and finally becomes a wasp itself. Hence, if a mumukshu meditates upon God as per the path advised by the Guru, he too becomes God-like.